Killing the euro-patient? The doctors think the medicine will work, if the euro does not die first 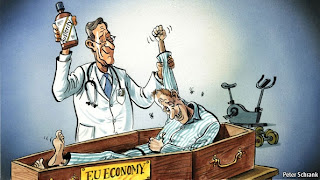 The European Commission this week released its health check of European economies—and the verdict at times seemed surreal. “I can say the medicine is beginning to work,” said José Manuel Barroso, the commission president. Forget alarms over Greece’s imminent departure and wild oscillations in Spanish bond spreads. The good news is that budget deficits are coming down and other imbalances are being redressed. So the doctors prescribe more of the same: austerity, structural reform and a war against tax evasion. But behind the impression of confidence, the commission is rethinking its treatment.

Super-fit Germany has made the adjustment earlier than planned and been released from the “excessive deficit procedure”. Bulgaria was similarly freed, proving that discipline is not just for the strong. They will join Estonia, Finland, Luxembourg and Sweden in the club complying with deficit targets. Hungary, which had incurred disapproval all round, now gets a nod for tackling its deficit: the commission recommended lifting a threat to withhold a chunk of aid.

Senior Eurocrats see this as evidence that the system of economic governance is working. Brussels monitors national budgets and economic policies under the so-called “European semester”, culminating with country-specific recommendations. They comprise some 1,500 pages of analysis, diagnosis and prescription for each of the European Union’s 27 members. If naming and shaming is not enough to push governments into reform, the commission has powers to recommend sanctions, enforceable unless a weighted majority of ministers blocks them.