Interview with Greek Writer Nikos Dimou: 'We Like to Live Beyond Our Means' 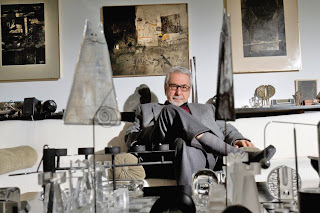 In a SPIEGEL interview, Greek writer Nikos Dimou analyses the state of his country's psyche, describing the "deep fears that torment the Greek soul." He blames Greek politicians for the current crisis but insists the EU and Germany only have themselves to blame for the resentment that many Greeks feel.

Thirty-seven years ago, Nikos Dimou, who is now 76, wrote a book of aphorisms titled The Misery of Being Greek, which was published in 1975. In the book, he wrote that a Greek does "everything he can to widen the divide between desire and reality."

For this interview, he invited SPIEGEL to his apartment in Athens' leafy embassy district. The air smelled of jasmine, a sprinkler watered the lawn outside and Dimou's three-legged cat, Azurro, was asleep on the sofa. Dimou, who studied in Munich, served the reporters coffee and cake, despite his recent frustration with SPIEGEL. Like many people in Greece, he was hurt by the magazine's recent cover about the Greek crisis, which bore the headline "Acropolis Adieu!"

SPIEGEL: Mr. Dimou, you have studied the Greek soul more thoroughly than almost anyone. One could say you've practically dissected it. How is the Greek soul doing right now?

Dimou: The prevailing feeling is one of uncertainty. Greeks no longer feel confident, which partly has to do with their history. They have certainly suffered a great deal. But uncertainty also leads to aggression. We Greeks love conspiracy theories -- they help to explain and substantiate our uncertainties. That's why we don't only think with our heads and our reason, but also with our emotions. You must remember, even in the ancient world, learned Egyptians referred to the Greeks as "children." But this immaturity also has a kind of beauty to it.

SPIEGEL: And you truly believe that Greece's history continues to determine your fellow Greeks' behavior to this day, in the current crisis?

Dimou: Yes, without a doubt. Modern Greeks will always suffer from knowing what the ancient Greeks accomplished, which we can neither forget nor surpass. My theory is that the Greeks suffered culture shock when they were catapulted from feudal conditions to modernity within the space of a few years in the 19th century. Being caught somewhere between east and west, ancient glory and present poverty, between orthodoxy and enlightenment, has left the Greeks with an identity problem. That's what makes them unsettled and uncertain to this day. They always feel under threat.

SPIEGEL: Does that mean Greeks never entirely arrived in Europe?

Dimou: Greeks weren't free for a long time. First they were part of a multinational empire that spoke many different languages. Then they lived under Turkish rule for 500 years. Then all of a sudden they had to become Europeans, importing all these institutions. The result is that, to this day, Greeks don't have a good relationship with their government.

SPIEGEL: And why is all of this so important?

Dimou: It's important if you want to work together with the Greeks, or to reform their country. Then you need to know just what deeply rooted fears torment the Greek soul. I believe these fears resurface especially in crisis situations such as the one we currently have. Then Greeks, traditionally so hospitable, suddenly start to view others as enemies who've come to steal their souls. 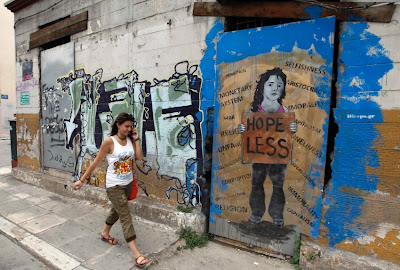