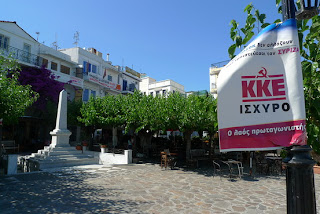 Locals refer to this craggy Aegean island simply as "the red rock"—not so much for its landscape, but for a political tradition that many in Europe worry will help pull Greece out of the euro zone.

There is little doubt which party will win the most votes on Sunday in Icaria, named after Icarus, the mythological figure who flew too close to the sun and plunged into the sea. The Communist Party of Greece, or KKE, a Marxist-Leninist party with members who still revere the Soviet Union, is expected to dominate the vote, as it has for more than a generation.

The Communist Party's success here helps explain Greece's longtime flirtation with an ideology that has done much to challenge the country's place in the currency bloc as its debt crisis has worsened. Greece's entrenched leftist tradition has propelled the KKE's popularity long after the end of Cold War, as well as the recent success of the radical left party Syriza, which upended national elections last month with its anti-austerity message.