Greeks Are Going to Polls Again, Afraid No One Will Win 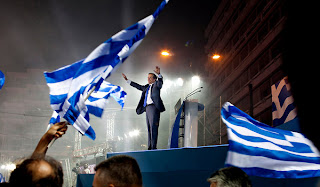 Greeks head to the polls on Sunday for the second time in two months with a pervasive sense of dread that any government that comes to power will fail to resolve the political and economic turmoil that threatens the country’s future — and the financial stability of Europe itself.

If the establishment center-right party New Democracy ekes out a victory in a race that polls show as tight, Greece still faces weeks or months of negotiations with European lenders over the terms of its austerity program, which all parties agree are too onerous to enforce on its rapidly shrinking economy.

A victory by the leftist party Syriza promises a more serious confrontation, especially with Germany, over how — and perhaps whether — to keep Greece in the euro zone.

The winner will also face an uphill battle to inject confidence into a paralyzed economy that depends heavily on the continued infusion of money by the European Central Bank. The Frankfurt-based bank has become the last lifeline for a financial system that has all but seized up and a deficit-ridden government that has little ability to raise new revenues or borrow money to continue its operations.