Below are some frequently asked- questions on Greece’s elections tomorrow and a list of some possible outcomes after the vote.

There are 9.9 million citizens eligible to vote in the election and polls close at 7 p.m. Athens time (5 p.m. in London, 12 p.m. in New York). Exit polls will be published immediately, and initial estimates of the result will come in around 9:30 p.m. local time. A more accurate estimate will be available at about 11 p.m.

The last date voter opinion polls were allowed to be made public was June 1. On that date, New Democracy led with 22.7 percent, Syriza had 22 percent, while Pasok had 11.2 percent. The maximum margin of error in the survey was 2.8 percentage points. The poll of 1,200 people was conducted by Metron Analysis for Athens-based ANT1 TV from May 30 to May 31.

What have the three main party leaders said about what they will do after the election?

New Democracy - Antonis Samaras said June 13 the parties “must find common ground” to avoid a third election or a euro exit. His conditions for cooperation are “staying in Europe and the need to renegotiate the bailout to cater for growth.”

Syriza - Alexis Tsipras said June 13 that European officials won’t push Greece out of the euro even if he fulfills his pledge to cancel austerity measures.

Pasok - Evangelos Venizelos has sent rival party leaders a framework for a coalition to avoid paralysis and said on June 12 a Greek government must attend the European Union summit at the end of the month. 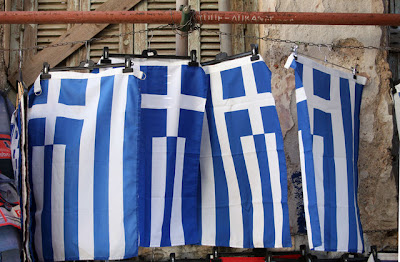 Posted by Yulie Foka-Kavalieraki at 2:06 AM