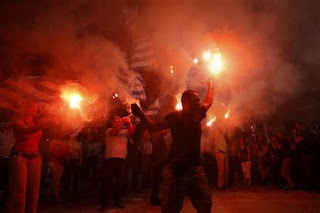 Greece's election on Sunday is too close to call and could push the debt-ridden country out of the European single currency, rocking the euro to its core and sowing turmoil in global financial markets.

The election, a re-run of a May 6 vote that ended in stalemate, amounts to a referendum on the punishing terms set by international lenders as the price of saving Greece from bankruptcy - withering tax hikes, job losses and pay cuts that have helped condemn Greeks to five years of record recession.

Riding a wave of anger to rise from political obscurity to contender for power, radical leftist SYRIZA leader Alexis Tsipras is threatening to tear up the terms of the 130 billion euro ($163.75 billion) bailout.

Tsipras says Europe cannot afford to cut Greece loose and cope with the fallout for the rest of the 17-member euro zone.

On the right, establishment heir and New Democracy leader Antonis Samaras says rejection of the EU/IMF bailout would mean a return to the drachma and even greater economic calamity.