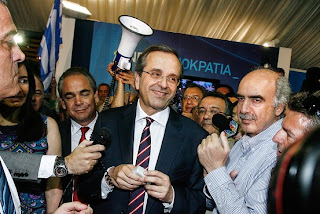 Europeans—at least the non-Germans—breathed a sigh of relief Sunday as a plurality of Greek voters took a step back from jumping out of the euro zone. Now we'll see what Europe's leaders can do with their latest reprieve.

Tallies as we went to press Sunday indicated the center-right New Democracy party won some 29.5% of the vote, up from its 18.8% showing last month. New Democracy told voters it wants to remain in the euro zone while claiming it would be better able to renegotiate the terms of the Greek bailout provided by the rest of the Europe.

Trailing New Democracy was the hard-left Syriza coalition with 27.1%—up substantially from its count from last time. The center-left Pasok, which dominated Greek politics for a generation and won the 2009 elections, was slated to take a mere 12.3%. Pasok polled only slightly more votes than the combined tally for the Communists and the neo-Nazi Golden Dawn.

New Democracy leader Antonis Samaras has a better chance at forming a government than he did two months ago—if only because failure would mean repeating the protests and violence that seem to increase with each Greek election. Pasok leaders have been coy about joining a New Democracy government, but that may change if the alternative is another election or more chaos.

As for Syriza, it may be just as happy losing this round, figuring it can pick up the pieces if the center-right fails again. Its tub-thumping leader, 37-year-old Alexis Tsipras, has been the great beneficiary of Greek rage at an economic program, misleadingly dubbed "austerity," that has managed to avoid neither recession nor default.