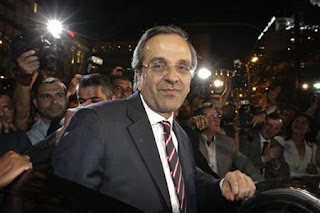 Parties backing a bailout saving Greece from bankruptcy won a slim parliamentary majority on Sunday, beating radical leftists who rejected austerity and bringing relief to the euro zone which was braced for fresh financial turmoil.

The election result looked likely to yield a coalition government led by conservative New Democracy but leaves an emboldened SYRIZA bloc to rally angry opposition in the streets to the punishing terms of the bailout.

Because of a 50-seat bonus given to the party which comes first, that would give New Democracy and PASOK 162 seats in the 300-seat parliament, in an alliance broadly committed to the 130 billion euros ($164 billion) bailout.

Germany signaled there may be some leeway on the timeframe for cuts demanded in return for the aid.

More
Posted by Yulie Foka-Kavalieraki at 2:08 AM

I appreciate your work here, and visit to get updates on the fate of Greece, and Europe, even while our politicians here praise the trends.