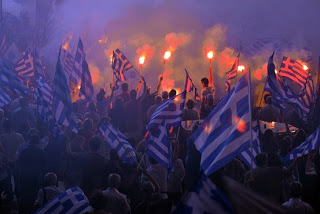 Whichever party wins Greece's national parliamentary election on Sunday will face an uphill task: inheriting a central government nearly out of cash, an economy in free fall and a restive public tired of austerity measures.

Greece's conservative leader Antonis Samaras, in his final rally before national elections on Sunday, said the euro currency represented an "anchor" of stability for the country and warned that Greece's recession-ravaged economy couldn't withstand the shock of further political uncertainty.

"The fate of the country will be decided by the answers the people give to seven crucial dilemmas," Mr. Samaras told several thousand supporters in a main square of the Greek capital. "The first of those that will be decided the day after tomorrow is the dilemma of the euro or the drachma."

Sunday's elections are being seen as a de facto referendum on Greece's future with the euro, pitting Mr. Samaras's New Democracy party—which mostly supports the country's latest European-led bailout—against their leftist rival, Syriza, which has denounced the deal and wants to tear up the austerity program that came with it.

More
Posted by Yulie Foka-Kavalieraki at 3:00 AM