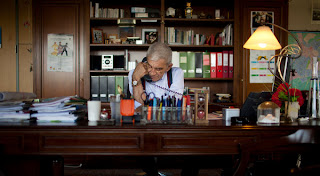 Yiannis Boutaris campaigned for mayor here in 2010, promising to shake up the bureaucracy. He did not think that this sprawling metropolis on the Aegean Sea — Greece’s second-largest city — really needed 5,000 employees. It could make do with 3,000.

But getting there turned out not to be so easy.

“I can’t fire anyone,” he said recently, leaning back in his favorite stuffed chair and inhaling deeply on a cigarette. “The law doesn’t allow it.”

Instead, Mr. Boutaris, a wiry 70-year-old with a gold stud in one ear, a buzz cut and a penchant for expletives, is trying something previously unheard of at this City Hall: employees are given job descriptions, goals, evaluations — and modest bonuses when they hit their targets.

In voting for Mr. Boutaris, the residents of Thessaloniki did what many experts predict the country will do when voters go to the polls on Sunday. They chose an outsider, someone who did not belong to the two mainstream parties that have led this country for nearly three decades, someone who held out the possibility of a new beginning.

More
Posted by Yulie Foka-Kavalieraki at 8:24 AM