Greek elections: Why the global economy could hang in the balance 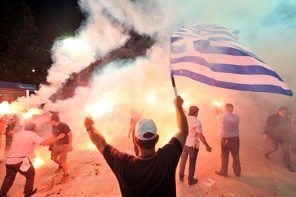 Sunday, Greek voters go to the polls to elect a new government. The outcome of the election could determine whether Greece stays in the euro or not. Which means the fate of Europe — and the global economy — just might hang in the balance. No pressure or anything! Here’s a primer:

Why is Greece’s euro membership at stake? Recall Greece’s basic dilemma: The country racked up many billions of dollars in debt that it can’t repay without help. In February, the European Central Bank, the European Commission, and the IMF (known as the “troika”) agreed to renegotiate Greece’s debts with lenders and give Greece a $170 billion bailout. In return, the Greek government had to agree to a series of spending cuts and tax hikes. These austerity measures are extremely unpopular with voters. Yet if Greece rejects the terms of the bailout, it might have no choice but to default on its debts and leave the euro.

So what are the choices facing Greek voters? At the moment, there are two main parties vying to head up the parliament. The leading conservative party, New Democracy, helped negotiate the original bailout deal with the troika back in February and has promised to “find common ground” on the agreement, albeit with some modifications to ease the pain for Greece. The other front-runner is a coalition of leftist parties, Syriza, whose leader, Alexis Tsipras, has rejected the troika agreement and wants to revamp it entirely.