Greek election: what could happen 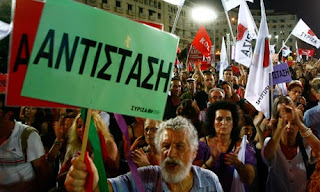 The centre-right "pro-European" New Democracy party emerges as front-runner but there is no outright winner. It forges a "national salvation" government with the socialist Pasok party, which also backs reforms in return for rescue funds from the EU, ECB and IMF. The coalition commits to the conditions of the latest €130bn bailout and terms are eased. Short-term stability could lead to more prevarication by Germany's Angela Merkel in dealing with greater EU fiscal unity. By delaying the crucial decisions, the eurozone staggers towards the next crisis.

Reform-minded "pro-European" forces win power but by a slight margin. A government is formed, but is constantly undermined by anti-bailout far-left Syriza party which becomes bold as opposition grows on the streets. The government falls in the autumn when called to pass further belt-tightening measures. The EU, ECB and IMF are encouraged by some to turn off the cash tap at Greeks' failure to honour austerity pledges. A possible contagious collapse in confidence across Europe threatens UK with a two-year recession as trade with the continent dries up.