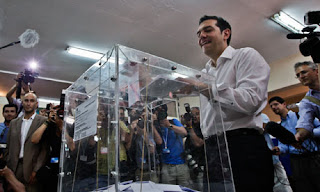 While Anna Benaki trod carefully down the white steps from the northern Athens polling station, Mania Barsevski sat at the bottom, cigarette in hand and contemplative. The two women had both voted for the parties that had defined them all their political lives, and both were adamant that they were doing the right thing for Greece's future. But there the parallels ended.

Benaki, a former justice minister for the centre-right and pro-bailout New Democracy party, insisted that her party alone could "take the country forward" and make sure it stayed in the euro. Barsevski, a former public servant forced to take early retirement at the age of 53 and now living off a reduced pension, voted – not for the first time – for Syriza. "Of course, we know it will be difficult," she said. "[If we win] we'll take over an economy that is destroyed. But if we don't win the situation will be even worse and by the next election there will be nothing left standing."

As Greeks went to the polls on Sunday in a subdued and anxious mood, two parties with sharply different policies and messages were battling it out for their votes in the country's most important election for decades. On the one hand was Antonis Samaras, the pro-bailout New Democracy leader who cast his vote in the Peloponnesian town of Pylos promising a "new beginning". On the other was anti-austerity champion Alexis Tsipras, who was mobbed by supporters and television cameras when he arrived at an Athens polling station. But, for many people in this weary, divided nation, neither man was the solution to their acute and growing problems.