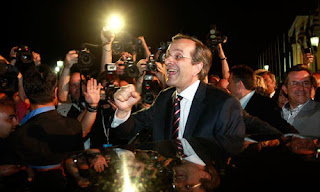 Emerging as the frontrunner of a nailbiting election seen as decisive for Greece's future in the eurozone, the conservative New Democracy leader, Antonis Samaras, began the arduous quest to build a coalition on Sunday night with an appeal to form a government of "national salvation".

New Democracy narrowly beat Syriza, an alliance of radical leftists, winning 29.53% of the vote against 27.12% for the coalition led by Alexis Tsipras. Samaras called the result a victory for Europe.

"The Greek people today voted for the European course of Greece and that we remain in the euro," Samaras declared in a victory speech. "This is an important moment for Greece and the rest of Europe," he insisted, saying that Athens would honour the commitments it made in exchange for rescue loans from the EU and IMF.

It had been hoped that the election – following an indecisive ballot on 6 May – would help clear a political landscape marred by escalating polarization and growing extremism. Sunday's poll failed to do either.