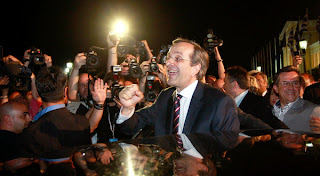 Greek voters narrowly favored a pro-bailout party in parliamentary elections on Sunday, a result that is likely to calm world markets and ease fears that the country will leave the euro zone.

Official projections showed the conservative New Democracy party as coming in first, giving it the chance to collect enough support to form a pro-bailout coalition and keep Greece in the euro zone.

Late Sunday night, Alexis Tsipras, the leader of the leftist Syriza party, conceded the election and congratulated the conservative leader of New Democracy, Antonis Samaras. Syriza had called for a rejection of the loan deal that Greece had made with foreign creditors.

Though no party is expected to earn enough seats in the 300-member Parliament to form a government, official projections show that the two traditional parties — New Democracy and the socialist Pasok — would get enough seats to form a coalition.

Projections gave New Democracy 29.5 percent and 128 seats. Syriza, which had vowed to reject the international conditions for the Greek bailout, was second with 27.1 percent and 72 seats. Pasok trailed with 12.3 percent and 33 seats. A coalition would need at least 151 seats to form a majority government. 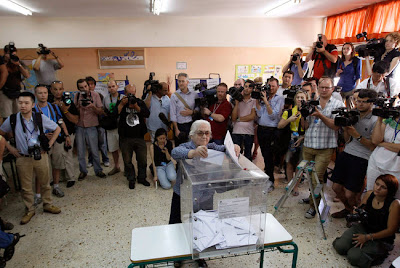