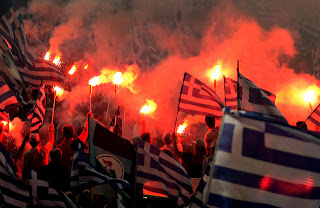 Greece voters go to polls for the second time in six weeks in an election that may determine the fate of the euro currency as global leaders gather for their annual summit.

With 21 parties on the ballot, the main event pits Syriza leader Alexis Tsipras, who has promised to renege on budget cuts demanded by creditors in exchange for a pair of bailouts, against New Democracy’s Antonis Samaras, who says his challenger is risking an exit from the currency union.

“The first thing we must determine in the elections on June 17 is to choose between the euro or drachma,” Samaras said in his final appeal June 15 in Athens. The night before, Tsipras told supporters to “turn your backs on the two parties of bankruptcy,” urging them to reject the two main parties.

The vote will turn on whether Greeks, in a fifth year of recession, accept open-ended austerity to stay in the euro or reject the bailout conditions and risk the turmoil of exiting the 17-nation currency. Group of 20 leaders begin their annual gathering in Los Cabos, Mexico, tomorrow, though France’s Francois Hollande and Germany’s Angela Merkel won’t leave until after the outcome in Greece is known.

Exit polls will be released when voting ends at 7 p.m. in Athens, with a first official estimate due around 9:30 p.m. The final polls, published on June 1, showed no party set to win a majority. The election marks a revote after the May 6 ballot failed to yield a government.

Tsipras and Samaras ran even in final opinion polls. The socialist Pasok party, which won the 2009 election and led the country into the bailout, was third at about 13 percent.