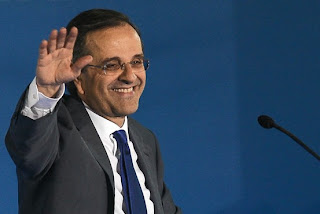 May's fractured Greek election left voters and investors in limbo. But even if this Sunday's rerun breaks the deadlock, it is unlikely to resolve the big question hanging over global markets: Will the country stay in the euro zone? Investors should brace for continued uncertainty and brinkmanship.

The election remains too close to call. Polls put the left-wing Syriza group and the conservative New Democracy party out in front—both of which say they intend to keep Greece in the euro. But neither seems likely to win an outright majority.

That generates three main scenarios. Under the first, no party is able to form a government, leading either to fresh elections—and fresh uncertainty—or the formation of a cross-party or technocratic government. The latter might be the most market-friendly outcome, potentially offering continuity with the Greek bailout program.

Under the second, New Democracy wins and forms a coalition government, implying a continuation of the Greek bailout program agreed on earlier this year. But the recession this year may be deeper than the 4.8% contraction originally forecast, and unemployment is 22.6%, above the 19.1% forecast for 2012. Even New Democracy is looking for some renegotiation of the bailout package, which will test Europe's resolve.