Greece prepares for election: 'we are going to the wall … things must change' 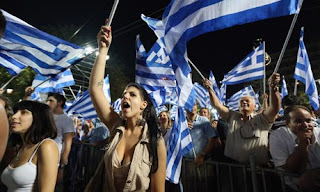 In the bustle and din of Kallidhromiou street market, stalls strained under the weight of early summer treats: black cherries and red apples; courgette flowers and strawberries. Crates and cardboard boxes covered the pavements; traders called out the latest bargains. Examining and bartering, debating and considering, the shoppers in this alternative corner of northern Athens had come out in force on Saturday for their weekly ritual. But no one on Kallidhromiou – Costas in the corner cafe, Spiros in the vintage vinyl shop or Thanasis Pikounis on his fruit stall – could pretend that business, on the eve of Greece's most important election for decades, was in any way proceeding as usual.

"Tsipras, Tsipras, Tsipras!" shouted Pikounis loudly, taking a break from serving his customers and prompting a passerby to counter with an angry cry of "Pasok!" The trader, who has had a stall at the market for the best part of 30 years, has never voted before for Syriza, the eclectic leftwing coalition led by Alexis Tsipras which is vying for first place in the crucial vote and, at the last election a mere six weeks ago, pushed the once-dominant centre-left Pasok party into third. But, as many are discovering in crisis-hit Greece, there's a first time for everything. Pikounis, his wife Litsa Lambrou, their two grown-up daughters and 18-year-old son, will all cast their ballot for Syriza.

"Because things have to change. We're very upset with the previous government and things have to get better," said 44-year-old Lambrou. Austerity had been bad for their business, she said, as people were holding back, buying cheaper and buying less. Their daughters, who still live with them, cannot find work. The family think Tsipras – who has vowed to renegotiate the terms of the bailout – is the man of the moment, although his critics say he will bring about Greece's hasty and humiliating exit from the euro. One daily newspaper, Ta Nea, had the picture of a half-euro, half-drachma coin on its front page, beneath the headline "Which Greece do we want?" But Lambrou remained sanguine. "I don't believe that will happen … But anyway, if it [staying in the euro] means we're going to stay in debt for years, it could be better for us to leave."