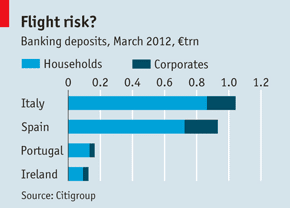 In continental capitals and bank boardrooms there is a common fear. It is that the slow jog of deposits leaving banks in Greece and, more recently, Spain, may turn into a full-blown run that quickly spreads from bank to bank, and then from country to country. There have already been some warning signs, such as a sudden acceleration of deposit outflows from Greek banks in May.

A fierce debate is now taking place as to the best way to avert a run that, if it started, might be difficult to contain and could lead to massive capital flight from the euro zone’s peripheral countries, which have €1.8 trillion ($2.2 trillion) in household deposits (see chart). Increasing numbers of people think the answer is greater financial integration. On May 30th the European Commission said there ought to be “full economic and monetary union, including a banking union; integrated financial supervision and a single deposit guarantee scheme”.

The first step is to shore up confidence in the region’s banks by making sure they have enough capital to withstand a crisis. It is far cheaper to recapitalise banks, after all, than to stand behind all of their deposits. Yet such efforts have been bungled time and again. Europe has twice over the past two years tried to reassure depositors and investors that its banks are sound by subjecting them to “stress tests” that were supposed to mimic an economic downturn. In each case the tests were soon followed by revelations of deep capital holes in some banks (newly nationalised Bankia among them). Since some national regulators have lost the confidence of markets, they are having to bring in outsiders to assess how much capital their banks need.