Europeans Agree on Sovereignty: Everyone Wants to Keep It 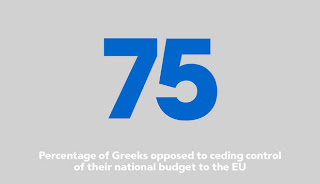 Europeans have finally found something they agree on: sovereignty. Almost no one wants to give it up.

Majorities in eight European Union countries surveyed by Pew Research Center recently opposed the loss of budgetary control to EU officials. Of the five euro-zone countries included in the study, only Italy favored increased supranational authority. In Greece, which is still flirting with bankruptcy even after forming a new government, a whopping 75 percent are against ceding control to a finance ministry in Brussels.

The English-speaking world and much of southern Europe are waiting for German Chancellor Angela Merkel to blink on common bonds (translation: "I spend, you pay"), the use of bailout funds to finance banks directly and a lender-of-last-resort role for the European Central Bank. If only Germany would just roll over, the thinking goes, the world could go back to prosperity and the problem would be solved.