European dysfunction chart of the day, Greece vs Germany edition

Mark Dow has found an astonishing set of results from a February opinion poll in Greece; it’s hard to imagine that Greek attitudes to Germany have improved since then. Here’s just one of the 13 slides: 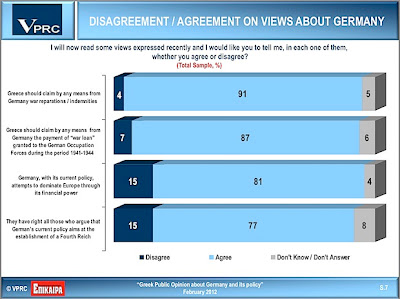 The final question, in particular, renders rather unfunny the joke about the German Chancellor flying to Athens for some meetings, and being stopped at immigration. “Name?” she’s asked. “Angela Merkel.” “Occupation?” “No, I’m just here for a couple of days.”

For his part, Dow seizes on a different question — one which shows that 51% of Greeks attribute Germany’s strong economy to corruption, and only 18% attribute it to competitiveness. Greek public opinion, it seems, is decidedly of the view that the only way Greece can compete with Germany is to become a lot more corrupt.