The 17 countries that use the euro should set up a "banking union" that allows them to share the burden of bank failures, the European Union's executive arm said Wednesday, as worries grew about whether Spain has the financial strength to shield lenders suffering from a meltdown of its property market.

The European Commission called on the euro zone to allow its new rescue fund to directly prop up vulnerable banks—rather than pushing their home countries into full-blown bailouts.

It also raised the idea of a pan-European deposit insurance fund, which would further shield individual governments from the cost of expensive bank failures.

With its recommendations, the European Commission is setting itself up for a clash with rich euro countries—such as Germany, Finland and the Netherlands—that have so far stamped out any attempts to make them more responsible for the financial troubles of their weaker partners. 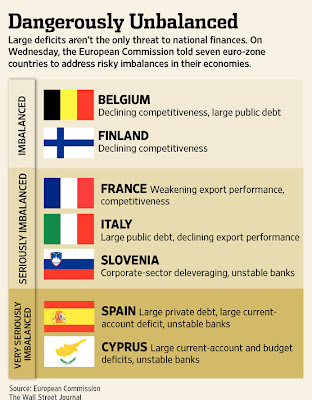 Posted by Yulie Foka-Kavalieraki at 11:24 PM