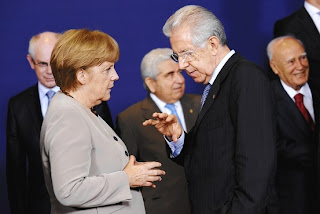 European leaders at a two-day summit in Brussels said they would speed up plans to create a single supervisor to oversee the euro zone's banks, and agreed on measures aimed at reducing soaring borrowing costs for Spain and Italy.

After 14 hours of wrangling on the summit's first day, the leaders agreed that the euro zone's bailout funds should be able to directly boost the capital of struggling banks and said that loans they are planning to help Spain recapitalize its banks wouldn't be ranked above those of private investors in the creditor pecking order—responding to an issue that appeared to cause a negative reaction to Spain's request for up to €100 billion($125 billion) of aid.

They said they would examine ways for the bailout funds to help well-performing countries that didn't need full-blown economic adjustment programs like those they insisted on for past bailout recipients Greece, Portugal and Ireland. But after considering the purchase of bonds directly from governments and in the secondary markets, they couldn't agree on specifics. Thomas Weiser, a senior European official, said such countries should be able to benefit by the summer.

In a statement issued after the meeting, the leaders said: "We affirm that it is imperative to break the vicious circle between banks and sovereigns."

More
Posted by Yulie Foka-Kavalieraki at 7:47 AM