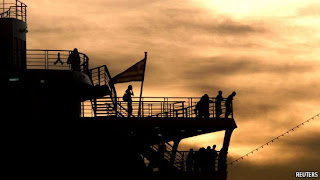 For a city in crisis, Athens feels normal enough. There are signs of hardship, true. The number of beggars on the street is noticeable. There are lots of boarded-up shops, which increase in volume in the suburbs. Those that are open are not exactly packed. But the city feels safe, boasts some world-class attractions, and has high-quality infrastructure, much of it from the 2004 Olympics. And however mismanaged the economy, no one has yet found a way to screw up the weather.

Even so, tourists are not coming to the capital. The drop in tourist arrivals into Greece over the first five months of this year was pretty much all accounted for by a fall in visitors to Athens. Locals in the industry blame the images of strikes and demonstrations in the city, and do not expect a quick rebound.

Any fall off in tourism is bad news for Greece. The industry is the biggest employer in the country, and contributes the largest slice of GDP. If Athens is in trouble as a destination, Greece has to keep attracting people to its islands, where most foreign visitors go. The evidence is that this is doable: last year saw record tourism numbers in Greece (partly thanks to unrest in north Africa and the Middle East). A shortening of visa-approval times to a matter of a few days has encouraged very rapid growth in arrivals from Russia and Ukraine. Ideas abound for how to move Greece away from a focus on “sun and sand” holidays into higher-value areas like cruising and yachting.