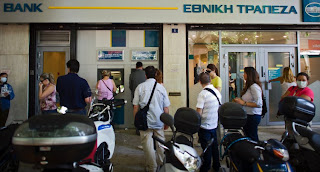 Many Greeks are emptying their bank accounts out of fear that the country may return to the drachma. But most of the money is not going abroad. Instead, individuals are storing cash in safe deposit boxes or at home -- leading to an increase in burglaries.

Joanna Stavropoulos is not proud of what she has done. "I had a guilty conscience when I withdrew my money from Greece," says the 43-year-old. Of course she knew what would happen if everybody does the same: Greece's banks would be threatened with collapse. But she says she had to think of her two-month-old daughter, Josephina, who is currently asleep on Joanna's shoulder.

Increasing numbers of Greeks are following Joanna Stavropoulos' example and emptying their accounts. They are afraid that Greece may leave the euro zone and return to the drachma.

Stavropoulos is one of the few people who know very well what this scenario would look like in concrete terms. As a journalist and NGO worker, she has traveled all over the world, most recently in Haiti and Iraq. "I have been to countries where banks closed," she says. She was in Argentina, for example, when the government declared a national default. She has also lived in Zimbabwe, where three-digit inflation destroyed the currency. Joanna is sure that Greece could face the same thing if it returns to the drachma. "My country is going downhill," she says.

There is still little sign of panic in Greece, and there has not been a stampede to the banks. Nevertheless, people are withdrawing hundreds of millions of euros from the banks every day. In May alone, outflows totaled €5 billion. According to official figures, €80 billion has been withdrawn since the start of the crisis.