Democracy in action: The outcome is still highly uncertain—as is Greece’s future in the euro 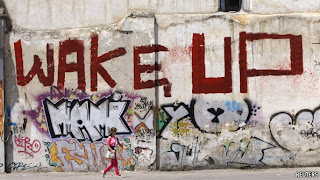 Greek voters face a bleak choice on June 17th, in their second general election in six weeks. The sensible options are the centre-right New Democracy (ND) party or the PanHellenic Socialist Movement (Pasok). Both parties promise a future in the euro, though the cost is high: at least three more years of austerity in return for shrinking external help. So angry, jobless Greeks may prefer the alternative: the radical left Syriza coalition, which came second on May 6th and is now hard on ND’s tail. They are tempted by talk of Robin Hood taxes to help the poor and the renationalising of much of the economy.

Opinion polls are volatile and inconsistent. But most show a close contest between ND and Syriza, with Pasok trailing in third. A poll by GPO for Mega, a private television station, gives ND 23.4% to 22.1% for Syriza and 13.5% for Pasok. Efforts by Antonis Samaras, the ND leader, to rally centre-right voters may be paying off. Dora Bakoyannis, a pro-reform former foreign minister, has rejoined him along with members of her liberal splinter group, the Democratic Alliance. Right-wingers from two other small parties are also creeping back. Pasok is having a much tougher time; hardline supporters scared of losing cushy public-sector jobs have fled to Syriza. Evangelos Venizelos, its leader, is fighting to avert an all-out collapse at the polls, say campaign workers.

The mood is gloomy. Few Greeks are confident that a stable government will emerge from the election. Optimists hope ND will win and team up with Pasok and Democratic Left, a small party of ex-Syriza moderates. If Alexis Tsipras, the charismatic Syriza leader, pulls his party into first place, he would have to find coalition partners among the same parties. Mr Tsipras argues that Greece can dump the European Union/IMF bail-out terms, yet keep the euro. If he comes to power, a confrontation with Brussels, which takes the opposite view, would surely follow.