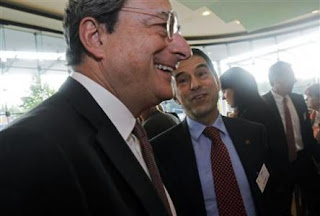 Central banks from Tokyo to London checked their ammunition on Friday in preparation for any turmoil from Greece's election, with the European Central Bank hinting at an interest rate cut and Britain set to open its coffers.

Tensions were high about how to manage the euro zone's debt crisis - epitomized by Greece's bankruptcy and need for international aid - and a rare fight broke out between Germany and France, normally the glue that keeps the bloc together.

The feeling of crisis was real. "We must do everything possible to prevent the euro zone from falling apart," Dutch Prime Minister Mark Rutte said on television.

ECB President Mario Draghi, one of many policymakers gearing up for trouble after Sunday's vote in Greece, said his bank was ready to step in and fund any viable euro zone bank that gets in trouble.