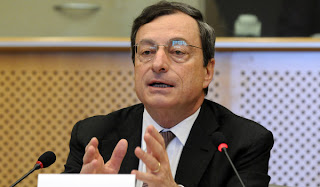 The president of the European Central Bank, Mario Draghi, warned Thursday that the structure of the euro currency union had become “unsustainable” and criticized political leaders who he said had been slow to respond to a regional debt crisis now well into its third year.

On the desperation scale, the plea by Mario Draghi to European lawmakers Thursday was not on the same level as the genuflection to congressional leaders in 2008 by the U.S. Treasury secretary at the time, Henry M. Paulson Jr., who was begging them to approve a huge bank bailout.

But the note of frustration and urgency in Mr. Draghi’s voice made clear that he was aware of the problems in the euro zone that he said only the member nations’ politicians could now solve.

There have been many spikes in the euro zone’s crisis fever in the past, of course, with a bailout here or a stopgap measure there seeming to calm things for a while. But this time, Europe may have reached a moment when the currency union’s survival depends on a powerful, convincing response.

Greece, progenitor of the debt debacle, is in political turmoil once again, and this time it is in danger of dropping out of the euro zone altogether. Spain, with one of the region’s largest economies, is in the grip of a banking crisis, and there is a growing sense that the danger to Spanish banks is of an entirely different order of magnitude from that in suffering but small Greece.