Biting the Bullet at the Ballot Box 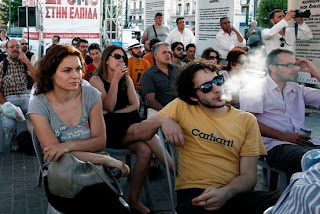 It hasn't been a good year for Yannis Delatolas.

The 45-year-old electrical engineer's salary was cut by nearly a third and his tax bill skyrocketed, as the economy spiraled downward and new levies were imposed to meet European Union-set budget targets.

Mr. Delatolas said he considered voting for the leftist Syriza party, which pledged to rip up the strict terms of Greece's EU rescue package, but decided the risk of Greece's being shoved out of the common currency was worse than the prospect of more austerity.

On Sunday, he cast his ballot for Syriza's conservative pro-bailout rival, New Democracy.

"We have to stay in the euro, regardless of the pain," Mr. Delatolas said. "I can't play around with the future of my two children."

That electoral calculus helped propel New Democracy to victory over Syriza in one of the most closely watched elections in Greek history.

With 99% of ballots counted Sunday night, New Democracy had 30% of the vote, compared with 27% for Syriza.