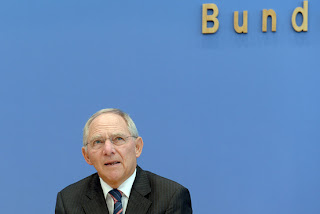 Germany may be willing to move sooner than expected to accept shared liability of euro-zone debt and would support short-term measures to deal with the acute financing problems facing some of the region's governments, German Finance Minister Wolfgang Schäuble said in an interview with The Wall Street Journal ahead of today's European summit.

Mr. Schäuble said Germany could agree to some form of debt mutualization as soon as Berlin is convinced that the path toward establishing centralized European controls over national fiscal policy is irreversible. That could happen before full implementation of treaty changes.

Such a fundamental change—in effect, a grand European bargain between Germany and other euro members—would require countries to give up a large degree of sovereignty over their budgets. Many European policy makers are asking how far Berlin is willing to go in return to putting its financial strength at the disposal of the euro zone.

"We are willing to go as far as we need to in order to get a sustainable agreement in Europe," Mr. Schäuble, speaking in his spartan Berlin office, said.