At Core of Greek Chaos, a Reviled Tax 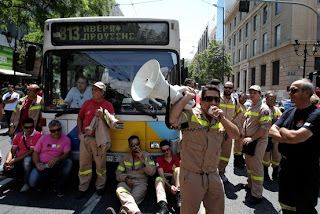 When the Greek government surprised homeowners in September by imposing a new national property tax, the mayor of this down-at-the-heels suburb on the western fringe of Athens sprung into action—mobilizing against it.

Stavros Kasimatis opened his office to poor residents who refused to pay the tax, which had been added to electricity bills in an effort to boost Greece's woeful rate of revenue collection. Municipal workers told the residents to pay only for power, then helped them fill out legal paperwork asking a judge to prevent the electric company from shutting off the lights. 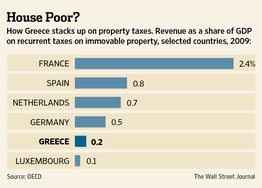 Mr. Kasimatis brought 1,165 of the petitions to a local district court. In February, he won.

"From the very first moment, we thought that this measure was unconstitutional," said Mr. Kasimatis, who campaigned with the support of left-leaning parties. "Power, energy, is a social right. They were blackmailing citizens."

Today, Greece is convulsing ahead of its most critical election in at least a generation. One of the flash points is the new property tax—a window into what has gone wrong with Greece, and with Europe's plan to rescue it.