A Power Vacuum Is Killing the Euro Zone

As problems mount in the euro zone, it’s increasingly evident that we’ve been witnessing an institutional failure of monumental proportions.

What is to be done about Greece? Simply keeping it in the euro zone won’t help much, even if it’s possible. The continuing crisis has sapped confidence in banks not only in Greece, but also in Spain, Italy, Portugal and Ireland, though to varying degrees. Unless there are explicit guarantees to these banks soon, the market will likely take a further turn for the worse.

An absence of guarantees could prompt a broader chain reaction of capital flight and bank collapses across several countries.

The basic problem is that many people won’t keep their euros in a Greek bank, and perhaps not in a Spanish bank, either, when those euros can be moved to Germany or some other haven.

Yet German citizens do not appear ready to guarantee Spanish banks or, by extension, the whole credit system of Spain and the other periphery nations. Guarantees of that scope are probably impossible and may also require constitutional changes in some nations. 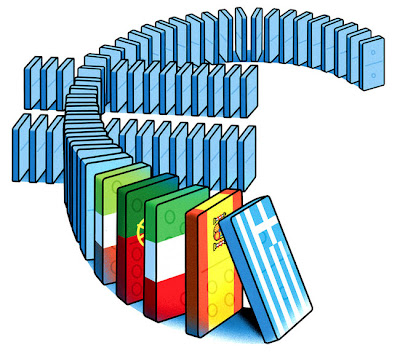