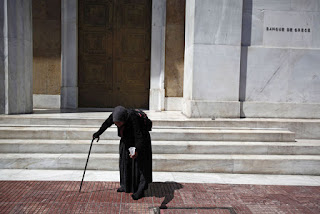 Nobel economics laureate Christopher Pissarides said wealthy Greeks would benefit at the expense of poorer citizens were the country to exit the euro.

“A lot of Greeks” have withdrawn money and deposited it with banks elswhere in the 17-nation currency zone, Pissarides said in an interview in London today. If the country returned to the drachma, the new currency would be so devalued they could buy it cheaply on international markets with the cash they’d exported, enabling them to buy more assets in Greece.

While poorer Greeks are equally able to appreciate the difficulties facing their country, they’re not as able to shield their funds from an exit from the common currency, Pissarides said. They need to preserve quick access to their savings, which isn’t as easy to do if it’s held at a foreign bank, and such lenders may not always accept small deposits.

“It’s the wealthy who will benefit because that’s who’s able to move their money abroad,” he said. “Wealthy Greeks have already done it, whereas the small saver is not going to do it.”

Greece is due to hold second elections next month after a May 6 ballot left politicians unable to form a government, raising speculation the nation may exit the euro area. Households and businesses pulled 34 billion euros ($42 billion) from Greek banks in the 12 months ended in March, 17 percent of the country’s total, according to the European Central Bank.