Most Aid to Athens Circles Back to Europe 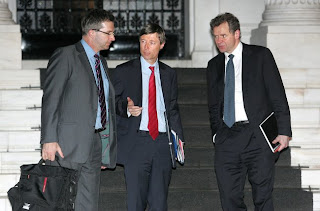 Its membership in the euro currency union hanging in the balance, Greece continues to receive billions of euros in emergency assistance from a so-called troika of lenders overseeing its bailout.

But almost none of the money is going to the Greek government to pay for vital public services. Instead, it is flowing directly back into the troika’s pockets.

The European bailout of 130 billion euros ($163.4 billion) that was supposed to buy time for Greece is mainly servicing only the interest on the country’s debt — while the Greek economy continues to struggle.

If that seems to make little sense economically, it has a certain logic in the politics of euro-finance. After all, the money dispensed by the troika — the European Central Bank, the International Monetary Fund and the European Commission — comes from European taxpayers, many of whom are increasingly wary of the political disarray that has afflicted Athens and clouded the future of the euro zone.

As they pay themselves, though, the troika members are also withholding other funds intended to keep the Greek government in operation.