Merkel Prepares to Strike Back Against Hollande 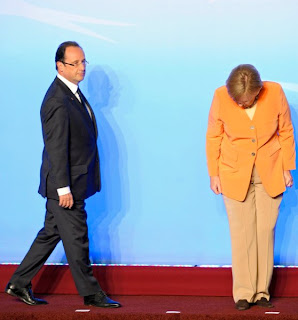 France's new president, François Hollande, has put the German chancellor on the defensive with his growth agenda. Now Angela Merkel is planning to strike back. She is calling for structural reforms to save the euro with a six-point plan aimed at harmonizing austerity and growth in Europe once again.

The more European leaders talked at a dinner last Wednesday, the grimmer Angela Merkel looked. One after another, they spoke out in favor of the joint assumption of debt and against the strict austerity course Berlin is calling for. The chancellor stared silently at the man who was responsible for this change of mood -- France's new president, François Hollande, who noted with satisfaction that there was "an outlook for euro bonds in Europe."

Merkel disagreed, saying that euro bonds are not the right tool, but to no avail. Only a minority stood behind the German leader. Even European Council President Herman Van Rompuy said, at the end of the dinner, that there should be "no taboos," and that he would examine the idea of euro bonds. "Herman," Merkel blurted out, "you should at least say that some at this table are of a different opinion."

Merkel's world had been turned upside down. For the first time in years, the chancellor did not set the tone at an EU summit, nor did she and the French president agree on joint positions in a backroom before the meeting.

Much depends on whether Merkel and Hollande will be able to find common ground in the fight over Europe's common currency. They have been arguing for weeks over whether more austerity or more spending can save the euro. Now the dispute has reached a new level of escalation. After Hollande's statements on Wednesday, Merkel is now presenting her opposing concept. In a six-point plan, she calls for deep-seated structural reforms for Europe. Under the plan, government-owned businesses are to be sold off, protections against wrongful dismissal relaxed and obstructive regulations for companies removed. There is also talk of special economic zones and privatization agencies based on the model of Germany's Treuhand trust, created at the time of reunification to sell off most of former East Germany's state-owned enterprises. In short, the Mediterranean region is to become more like Germany, but with better weather.

Merkel and Hollande are presenting two contrasting programs for the planned EU growth summit at the end of June. A compromise will have to be reached in the end, but there are still considerable risks. If the two leaders manage to forge a joint concept for the currency zone out of their different plans, they could go down in history as the saviors of the euro. If they fail, the process that a growing number of experts believe is unavoidable will only be accelerated: the breakup of the monetary union.