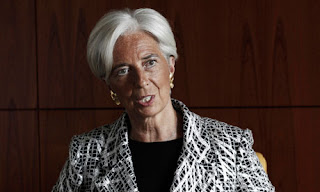 The International Monetary Fund has ratcheted up the pressure on crisis-hit Greece after its managing director, Christine Lagarde, said she has more sympathy for children deprived of decent schooling in sub-Saharan Africa than for many of those facing poverty in Athens.

In an uncompromising interview with the Guardian, Lagarde insists it is payback time for Greece and makes it clear that the IMF has no intention of softening the terms of the country's austerity package.

Using some of the bluntest language of the two-and-a-half-year debt crisis, she says Greek parents have to take responsibility if their children are being affected by spending cuts. "Parents have to pay their tax," she says.