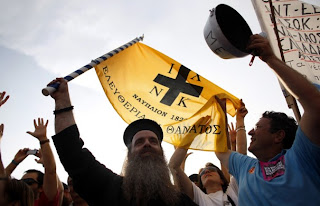 With this Mediterranean nation’s finances on life support, some here have turned to the church for spiritual succor. Others say the government needs its cold, hard cash.

The Greek Orthodox Church has long been not just a religious force but also an economic one, with a stake in the Greek National Bank, landholdings second only to the Greek government and a clergy bankrolled by the state.

During a crisis that has already created widespread poverty, priests say they are serving the needs of hard-hit citizens whose government has failed them. But critics say that the church’s tax breaks and its tangled relationship with the political leadership here are starving the country of revenue at a moment when time and money are running short.

Greece is headed for parliamentary elections on June 17 that could determine its future on the shared euro currency, with a choice between leaders who favor the $163 billion bailout that is saving the country from bankruptcy and those who oppose the painful measures that come as a condition of the rescue. If voters reject the bailout, the government could be out of money by the end of August, with government employees short of their paychecks.

Those would include the more than 10,000 priests on state payrolls, who cost taxpayers $238 million a year. Tax breaks on the church’s landholdings keep even more money away from government coffers at a time when every euro counts, critics say.