Greeks Furious Over Harsh Words from IMF and Germany 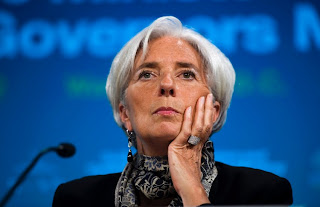 As Greeks prepare to head to the polls once again in three weeks, international criticism of the country is intensifying. IMF head Christine Lagarde on Friday said citizens must begin paying their taxes, while a member of the German cabinet referred to Greece as a "bottomless pit."

It's not often that world markets react to pre-election political surveys in countries the size of Greece. But on Monday, investor relief appears to be widespread at reports that support for pro-austerity parties in Greece is rising ahead of general elections scheduled for June 17.

According to the polls, an increase of support for the center-right party New Democracy could give it enough seats in parliament to team up with the Socialist PASOK party, both of which support pursuing the austerity policies handed down by the European Union and International Monetary Fund (IMF) in exchange for massive bailout aid. The anti-austerity party Syriza is likely to come in second. The new elections became necessary after results from the vote on May 6 made the formation of a governing coalition impossible.

Despite the temporary market respite -- following last week's freefall on fears of a disorderly Greek exit from the euro zone -- tempers remain on edge in Greece. And over the weekend, much of the ire of the country's political elite was focused on IMF head Christine Lagarde.

In an interview published Friday in the British daily Guardian, Lagarde blasted Greeks for not paying their taxes. "As far as Athens is concerned," she said, "I also think about all those people who are trying to escape tax all the time. All these people in Greece who are trying to escape tax." Just to make sure her message was getting through, she added: "I think they should also help themselves collectively ... by all paying their tax."

Elsewhere in the interview, she said that she thinks more about children in the African country of Niger than she does about Greeks. "I think they need even more help than the people of Athens," she said.