Greeks Are Divided on Way Forward 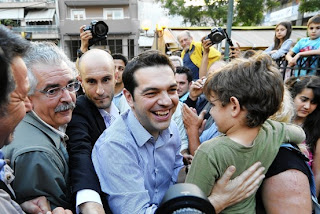 Greece's radical left party has upended the country's politics with an idea as simple as it is seductive: Athens can renege on the deals it made in exchange for a bailout, and still remain in the euro.

Greece's future, and possibly that of Europe's monetary union, may depend on how many Greeks buy into the idea.

The Coalition of the Radical Left, known as Syriza, is competing with Greece's conservative New Democracy to become the biggest party in Parliament in June 17 elections that could send further shock waves through Europe.

Several opinion polls published over the weekend put the upstart Syriza behind the conservatives by between 1.3 and 5.7 percentage points. But the surveys are volatile: They underestimated Syriza's support in Greece's May 6 elections, whose inconclusive outcome forced a second ballot. With three weeks of the campaign left, the race is wide open.

Syriza leader Alexis Tsipras, a 37-year-old former Communist youth activist, promises that despite its dire financial straits, Greece can halt austerity programs, restore social spending and nevertheless continue to receive the payments from the euro zone and the International Monetary Fund that keep it from bankruptcy. 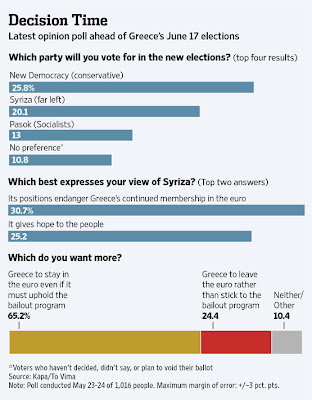 Posted by Yulie Foka-Kavalieraki at 2:41 PM