Greeks and Germans Are 'Polar Opposites' 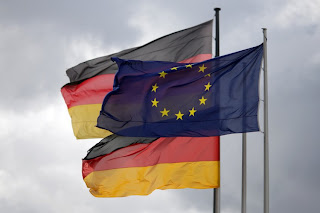 Germans are seen as the hardest working and least corruptible people in the European Union, a survey of eight EU countries shows, with Chancellor Angela Merkel receiving good marks for her crisis management. Greece, which has high praise for itself, is viewed poorly by its neighbors.

"Germany is the most admired country in the EU and its chancellor the most respected leader," a report releasing the poll's figures said. Germans "stand alone," as they view their recent economic experiences more positively than others and are more favorable to Europe.

"But contrary to their popular portrayal, the Germans do not differ markedly from other Europeans on policy issues. On many counts it is the Greeks who are the most isolated in Europe," the report said.

Germany was the only country in which most people -- 59 percent -- think their country has been helped by European integration. The most negative were the Greeks, with 70 percent saying EU integration had hurt them, followed by the French with 63 percent. Overall the rating was 34 percent.