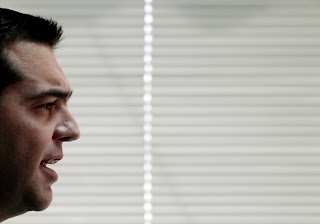 Alexis Tsipras, head of the leftist Syriza party, wants an end to austerity in Greece. Ahead of Greek general elections in mid-June, he speaks with SPIEGEL about the dangers his country poses to the euro, the failure of economization measures thus far and why Chancellor Angela Merkel would be to blame if the Greek economy collapses.

Tsipras, the 37-year-old rising star in Greek politics, lays his Ray-Ban sunglasses on the table. It's Tuesday afternoon, and he looks exhausted. Indeed, he has a packed schedule: first Paris and then Berlin, where he met with Gregor Gysi and then with Jürgen Trittin and Sigmar Gabriel, senior officials in Germany's Left Party, Green Party and Social Democratic Party, respectively. Tsipras was the surprise victor when his Radical Left (Syriza) party took second place in May 6 general elections in Greece. Because leaders were unable to form a coalition government, a new election will be held on June 17. Most believe that Tsipras will attract even more votes in this second election.

Tsipras' tour through "Europe's two most important capital cities," as he put it, was primarily about cultivating his image. The civil engineer, already politically active in high school as a member of the Communist Youth of Greece, numbers among the strongest critics of the EU-International Monetary Fund (IMF) strategy for Greece, which calls for radical budget cuts and austerity in return for international aid. Should he win the June 17 election, Tsipras plans to ditch the terms of the bailout agreements struck with its creditors. On the campaign trail, one of his slogans has been that Greece is in danger of becoming a "German colony." But he toned things down in Berlin, saying: "We want to persuade, not blackmail."

SPIEGEL: Mr. Tsipras, is Berlin really as bad as you always say back home in Athens whenever you rail against theevil Germans?

Alexis Tsipras: Berlin is my favorite capital city in Europe. It's too bad that I'm always here only briefly. I'd like to have more time.

SPIEGEL: You might be Greece's prime minister the next time you come to Berlin. If that happens, will Greece still be a member of the euro zone?

Tsipras: Of course. We'll do everything we can so that Greece can retain the euro. We're trying to convince our European partners that it's also in their interest to finally lift the austerity diktat. We need policies that don't destroy the Greek economy but, rather, allow for renewed growth. If the austerity course isn't changed, it will result in the complete destruction of the Greek economy. That would indeed be a danger to the euro.