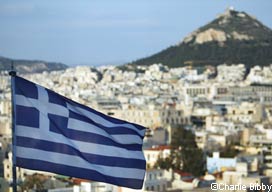 Greece’s public finances could collapse as early as next month, leaving salaries and pensions unpaid unless a stable government emerges from the June 17 election, according to Lucas Papademos, the technocrat prime minister who left office after this month’s inconclusive vote.

Mr Papademos warned that conditions were deteriorating faster than expected with cash flow likely to turn negative in early June amid a sharp fall in tax revenues and a loosening of spending controls during two back-to-back election campaigns.

Mounting anxiety that Greece is headed for further political instability and a possible exit from the euro has prompted many Greeks to postpone making tax payments, and has also accelerated outflows of deposits from local banks.

Athens bankers estimate that more than €3bn of cash withdrawn since the May 6 election has been stashed in safe-deposit boxes and under mattresses in case the country is forced to readopt the drachma.