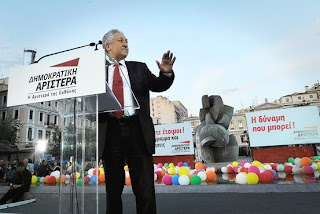 Two political mavericks—one a soft-spoken former Communist, the other a firebrand nationalist—are tapping into public anger at incumbents and the harsh austerity measures Greece must adopt to stay in the euro, as support for mainstream parties withers ahead of May 6 elections.

Right-wing economist Panos Kammenos and left-wing lawyer Fotis Kouvelis are poles apart ideologically. But they are currently among the most popular party leaders in Greece, and their parties have sprung from nowhere to challenge Greece's political establishment and the austerity policies that many Greeks blame for deepening their country's economic crisis.

Between them, Mr. Kammenos's Independent Greeks and Mr. Kouvelis's Democratic Left could win around 20% of the vote. Their rise is cutting deeply into support for Greece's two mainstream parties—the conservative New Democracy party and the center-left Socialists, known as Pasok—that share power in a fractious coalition government.

The weakened Socialists and conservatives are expected to renew their coalition after the election, simply because the rise of radical opponents such as Messrs. Kammenos and Kouvelis will probably leave them with no other way to muster a majority in Parliament. Greeks' growing support for the far left and far right means governing the restless country and implementing the massive extra spending cuts that the European Union wants to see will be harder than ever.

The Independent Greeks and Democratic Left are the strongest of several upstart parties and protest movements that are expected to win seats in Parliament and make life hard for the next government. Others include the Soviet-style Communist Party and the neo-Nazi group Golden Dawn. 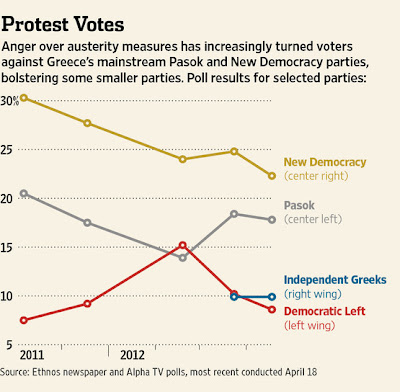 Posted by Aristides N. Hatzis at 8:23 AM