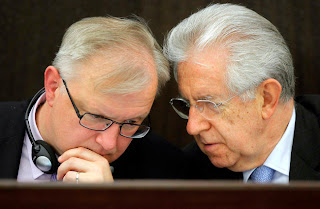 As leaders in Germany and some other euro zone countries press for tighter coordination of the region’s borrowing and spending policies, European Union officials on Wednesday will take an important step in that direction by issuing report cards on national budget plans. Poor marks could eventually mean fines or other penalties for members that do not make adequate efforts to balance their books.

The long-term goal is to prevent the kind of uncontrolled spending that crippled Greece from happening again. But with the euro zone in financial flames, the newly strengthened budget review process is also a reminder of how slowly things move in official E.U. channels. Between the adoption of the new budget enforcement rules last autumn and this incremental step, governments in Greece, Italy and France have fallen or been voted out of office. And Spain’s banking and debt crises are growing worse by the day.

And yet, Brussels — which is the capital of Belgium but also a byword for the 23,000 civil servants at the European Commission — might be able to prevent future crises from becoming so fiendishly hard to manage.