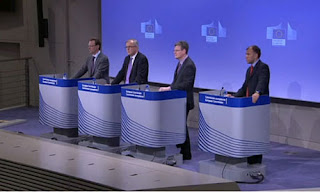 After a near 7% contraction in GDP last year, the people of Greece are not expected to to have a better time in 2012. On almost every measure, from public administration to the size of its hidden economy, Athens is at the bottom of the EU table. The silver lining, says Brussels, is the way government spending and business subsidies have been cut to the bone over the last two years. Now it must press ahead with structural reforms.

Reaction: An election next month could back the EU's austerity plans on the promise of further bailout funds.