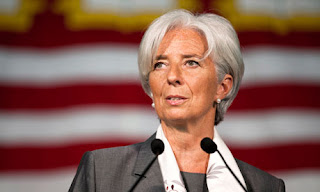 IMF chief Christine Lagarde's uncompromising description of Greeks as rampant tax-dodgers has provoked a furious reaction in Athens less than a month before the crisis-hit country heads to the polls.

With Greece mired in ever-worsening recession, with cutbacks and tax rises, the IMF managing director was rounded on by almost the entire political establishment.

In an interview with the Guardian, Lagarde said she had more sympathy for victims of poverty in sub-Saharan Africa than Greeks hit by the economic crisis.

More
Posted by Yulie Foka-Kavalieraki at 10:45 AM