The Betting Window Is Open for Greece’s Future 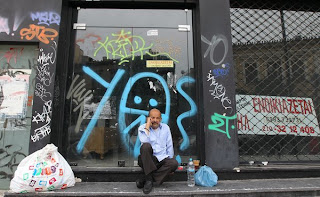 INTRADE is an online betting site with an enviable record for predicting Oscar winners and political events. It’s gotten the last two American presidential elections right. Now it’s wading into the perils of the euro zone.

The long-running European crisis has already roiled financial markets around the world, with investors shifting away from riskier assets like stocks and parking their money in havens like German, Swedish, Dutch and United States government bonds, whose yields are now extraordinarily low.

Just about everyone agrees that in the last month, the chance of Greece abandoning the euro has risen, with consequences that could be much more disruptive. European leaders meeting in Brussels on Wednesday failed yet again to come up with an enduring solution.

But how high is the probability of a euro breakup? Intrade says it’s about 40 percent.

More precisely, as of Friday, Intrade assessed the probability of Greece — or some other country — announcing its intention to drop the euro by year-end at 41.7 percent. It rises to 60 percent for a breakup by the end of 2013, and to 68.7 percent by the end of 2014.

How seriously should these projections be taken?