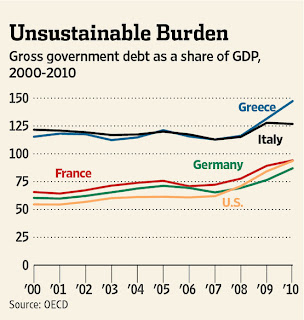 Growth or austerity? That's the choice facing Europe these days—or so the Keynesian consensus keeps saying. According to this view, which has dominated world economic councils since the 2008 crisis began, "growth" is mainly a function of government spending.

Spend more and you're for growth, even if a country raises taxes to pay for the spending. But dare to cut spending as the Germans suggest, and you're for austerity and thus opposed to growth.

This is a nonsense debate that misconstrues the real sources of economic prosperity and helps explain Europe's current mess. The real debate ought to be over which policies best produce growth.

In the 1980s, the world learned (or so we thought) that the way out of the malaise of the 1970s were reforms that encourage private investment and risk-taking, labor mobility and flexibility, an end to price controls, tax rates that encouraged capital formation, and what the World Bank now broadly calls "the ease of doing business." Amid this crisis, Europe has tried everything except these policies.

More
Posted by Yulie Foka-Kavalieraki at 2:21 AM