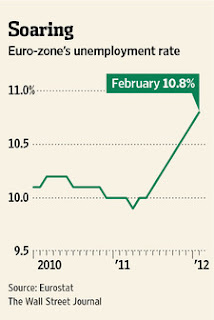 Dire figures on unemployment and manufacturing activity in the euro zone's weakest members on Monday highlighted the scale of the currency bloc's economic problems, days after finance ministers boosted their bailout fund in a bid to fend off the debt crisis.

The data suggest policy makers' hopes of a brief, shallow downturn may be wide off the mark, making it harder for governments to cut their debts as tax revenues fall and welfare payments increase.

Eurostat, the European Union's statistics agency, said the number of people without jobs in the 17 countries that use the euro rose 162,000, to 17.134 million in February, the highest total since the data were first compiled in January 1995.

That pushed the unemployment rate to 10.8% of the work force, the highest rate since June 1997 and an increase from 10.7% in January.

The figures "make for grim reading and cast a dark cloud over growth prospects for the region," said Martin van Vliet, an economist at ING Bank.

More
Posted by Aristides N. Hatzis at 1:35 AM