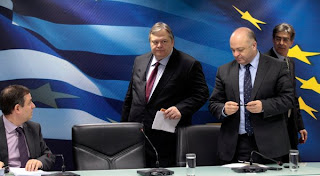 Greece may have been able, and even willing, to use strong-arm tactics to persuade private-sector bondholders to join the debt deal it completed Friday to stave off default. But next time those moves might not work so well.

When the heavily indebted nation confronts a new cash crunch in the coming years — as many experts and, indeed, the markets seem to believe it will — Greece will not be able to rely on deploying sophisticated legal tricks, like collective-action clauses, to force losses on relatively easy targets like banks and hedge funds.

With the completion of this deal, the International Monetary Fund and Greece’s European partners will possess 77 percent of the country’s outstanding debt. From now on, foreign taxpayers will be asked to suffer the bulk of the loss the next time Greece confronts a financial crisis — and they are likely to be much less forgiving.

The debt restructuring deal between Greece and its creditors on Friday was notable for not just its €100 billion-plus size and the 75 percent loss, or haircut, imposed upon investors. It also underscored Greece’s rapid evolution from private-sector debtor to being mostly reliant on the public sector.

More
Posted by Yulie Foka-Kavalieraki at 1:11 AM